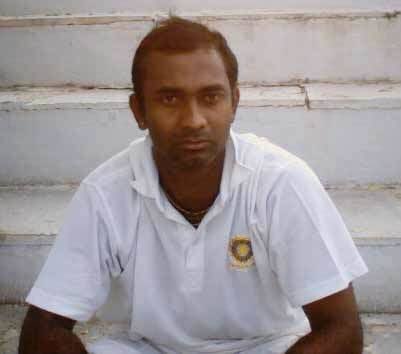 Vijay Bharadwaj is a former Indian cricketer who represented India in Tests and ODIs. He was a right-arm offbreak bowler and a right-handed batsman who played 3 Tests and 10 ODIs for India. He was born in 1975 in Bangalore, Karnataka. He represented Karnataka in the domestic cricket and made his first class debut in 1994. He played a key role in Karnataka’s three Ranji Trophy wins in the 1990s. At the international level, he won the Man of the Series award on his debut ODI series against South Africa in the LG Cup in Kenya in the 1999–2000 seasons. He retired from all forms of the game in 2006 and thereafter took up coaching assignments. He was the assistant coach of Royal Challengers Bangalore for the first three seasons of the Indian Premier League. He is the fielding coach of the Oman cricket team.