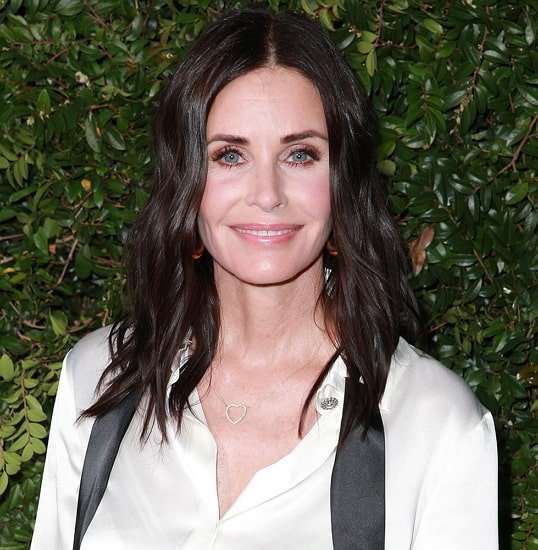 Courteney Bass Cox is an American who is a popular actress, director, and producer. She is best known for her work in the NBC sitcom TV series ‘Friends’ from 1994 to 2004 as Monica Geller. For ‘Friends’ itself, she received 7 Screen Actor Guild Award nominations from which she won 1.

She is also famous for her work in ‘Scream’ as Gale Weathers, ‘Family Ties’ as Lauren Miller, ‘Dirt’ as Lucy Spiller, ‘Cougar Town’ as Jules Cobb, and many more. Apart from these series, she has also been part of the film like ‘Masters of the Universe’, ‘Ace Ventura: Pet Detective’, ‘Barnyard’, ‘Bedtime Stories’, ‘Mothers and Daughters’ and many more.

Born on 15 June 1964, Cara’s age is 56 years as of January 2021. She was born in a well-settled family from Birmingham, Alabama, United States. Courteney is known to hold an American nationality and has her belief in the Epicospalian religion and she has English ancestry.

She completed her schooling at Mountain Brook High School. She pursued her further education from Mount Vernon College, Washington D.C. where she was pursuing her architecture course but left it in the middle and instead opted to pursue a career in acting and modeling.

She has 3 siblings. Her elder brother’s name is Richard Jr. who is now the Senior Vice President and Chief Information for Cox Enterprises, and her elder sisters are Virginia McFerrin, who is a researcher, and Dottie Pickett, who is a blogger.

Cox’s marital status is married. She is married to David Arquette, an American actor, professional wrestler, fashion designer, producer, and director. The couple got married in Grace Cathedral, San Fransisco on 12 June 1999 and have a daughter named ‘Coco’ together. However, the couple got separated and officially got divorced in May 2013.

Cox was in a relationship with Ian Copeland, a music agent whom Cox dated from 1984 to 1986. She later dated Paul Brown, a costume designer from June 1987 to January 1989. Later she dated Michael Keaton, famously known as the Batman actor from 1989 to 1995. She was rumored to be dating Kevin Costner. She also briefly dated Adam Duritz in 1997. She dated Brian Van Holt, her co-star from ‘Cougar Town’ from June 2013 to October 2013. In June 2014, Cox after 6 months of dating got engaged with Johnny McDaid, an actor, and musician. About 18 months later they called it off but again got together by Spring 2016 and are still happy together.

Cox is a beautiful and gorgeous-looking actress in the American film and television industry. She is very famous for her cute looks and bold personality. She looks adorable and owns impressive body measurements.

She owns a hot figure with her figure measurements measuring 35-24-34 inches approximately. Cox is about 5 ft and 5 inches in height and her body weight is around 63 Kg. Cox has shiny and long dark brown hair and also very attractive blue eyes.

Cox started her career as a model in the American industry. In 1984, she starred in an episode of ‘As the World Turns’ as Bunny. This year she also appeared in a music video titled ‘Dancing in the Dark’ as a young woman sung by the artist Bruce Springsteen.

In 1986, she starred in an episode of the series ‘The Love Boat’ as Carol, the TV film ‘Sylvan in Paradise’ as Lucy Apple, and 2 episodes of the series titled ‘Murder, She Wrote’ as Carol Bannister.

In the year 1987, she starred as Tarah in the film ‘Down Twisted’ and as Julie Winston in ‘Masters of the Universe’. This year she starred in 2 TV films titled ‘’If it’s Tuesday it Still Must be Belgium’ as Hana Wysocki and ‘’I’ll Be Home For Christmas’’ as Nora Bundy. From 1987 to 1989 she starred in 19 episodes in the recurring role of Lauren Miller for the series titled ‘Family Ties’.

In 1990, she starred as Jewel Jagger in the film titled ‘Mr. Destiny’ and as Kathleen in ‘Shaking the Tree’. This year she also worked in the TV film titled ‘Curiosity Kills’ as Gwen. In 1991, she worked in the movie titled ‘Blue Desert’ as Lisa Roberts. This year she also starred in an episode of the series titled ‘Morton & Hayes’ as Princess Lucy.

In 1995, she worked in an episode each of the TV shows titled ‘The Larry Sanders Show’ as herself and ‘Saturday Night Live’ as herself and as a host. The same year she also starred in a film titled ‘Sketch Artist II: Hands That See’. This year she also starred in a music video titled ‘’I’ll Be There For You’’ as Monica Geller sang by the artist The Rembrandts and in ‘Good Intentions’ by the artist Toad the Wet Sprocket.

In 1996, she starred in the movie ‘Scream’ as Gale Weathers which was a highly successful film. This year she also appeared in a music video titled ‘A Long December’ as Counting Crows. In 1997, she did 2 films titled ‘Commandments’ and ‘Scream 2’ as Rachel Luce and again Gale Weathers respectively.

In the year 2005, she worked in the uncredited movie titled ‘The Longest Yard’ as Lena. This year she also worked on the unsold pilot and executive produced ‘Rehab’ as Taylor Kennedy. Apart from this, she executive produces 3 TV films this year titled ‘Dirt Squirrel’, ‘Talk Show Diaries’ and ‘The MidNightly News’. From 2005 to 2007, she also executive produced 8 episodes of the series ‘Daisy Does America’.

In 2015, she starred in an episode of the show titled ‘Barely Famous’ as herself.

In the year 2016, she worked in the film titled ‘Mothers and Daughters’ as Beth. This year she executive produced and also starred as Hailey in the unsold pilot titled ‘Charity Chase’. The same year she also starred in an episode of the show titled ‘Running Wild with Bear Grylls’ as herself.

In 2017, she starred on an episode of each of 3 TV shows titled ‘Who Do You Think You Are?’, ‘Off Camera With Sam Jones’, and ‘The Gong Show’ all as herself.

In 2018, she starred in an episode of the series titled ‘Shameless’ as Jen Wagner. From 2019 to 2020, she starred in 20 episodes and executive produced and created the TV show titled ‘9 Months with Courtney Cox’ as herself and a host.

In 2020, she worked in the documentary titled ‘You Cannot Kill David Arquette’ as herself. This year she also starred in an episode of the TV show titled ‘Modern Family’ as herself and in the Red Nose Day Special TV show titled ‘Celebrity Escape Room’ again as herself. In 2021, she was seen in the TV special show ‘The One Where They got Back Together’ as herself which she also executive produced.